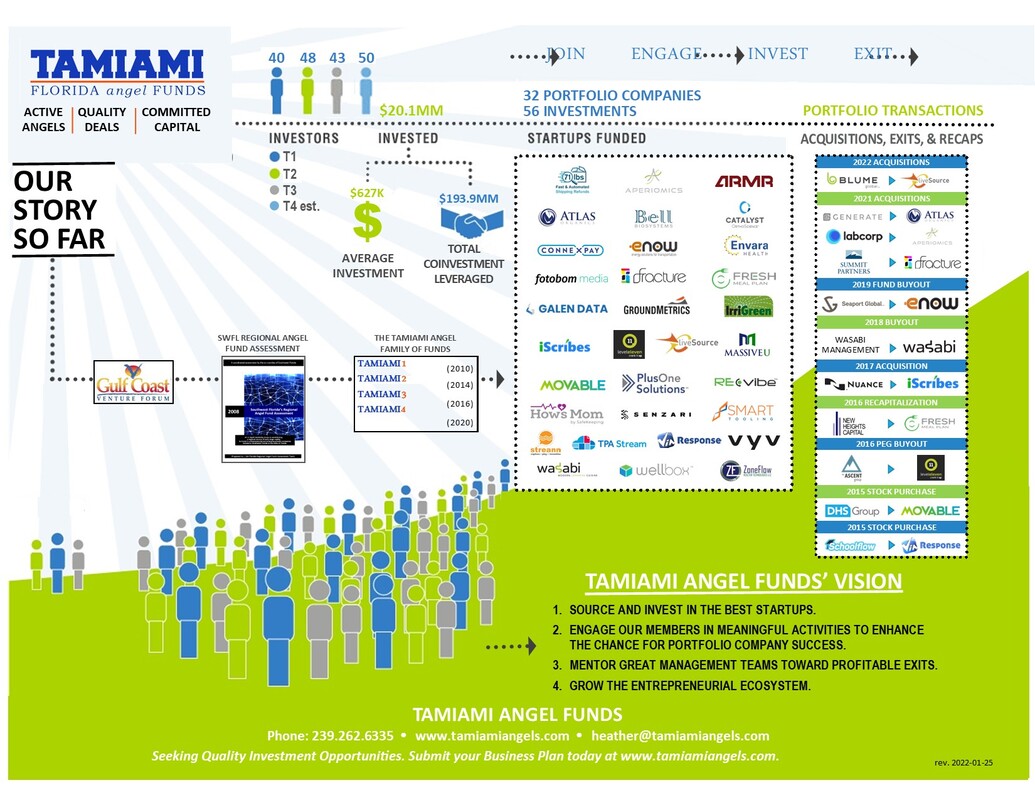 Tamiami Angel Funds origin started with the establishment of the Gulf Coast Venture Forum in 2001. The Gulf Coast Venture Forum (”GCVF”), a Florida 501(c)6 non-profit, was founded by local business leaders, economic development professionals and university administrators. Their combined goal was to create a more diverse economy for Southwest Florida and create a linkage between local Angel Investors and local Entrepreneurs in order to launch more high growth companies in our region. As the GCVF gained critical mass and built a reputation as a credible Angel Investment Network through out Florida, the organization's individual and informal investment policy hindered its ability to consistently connect entrepreneurs to investors. The GCVF’s investment policy is that each member makes their own investment decision based upon the merit of the investment prospectus, their own individual due diligence examination and negotiations with the entrepreneur. In essence, the GCVF suffered the same challenges that private individuals face when acting alone. How could an individual or different group of individuals cooperate to evaluate each investment opportunity in a consistent manner when the GCVF, as a volunteer non-profit organization, did not offer any assistance. This left the GCVF leadership pondering a number of strategic alternatives.

In 2007, legislation passed by the Florida Legislature which created the Florida Capital Formation Act, inspired the GCVF leadership and other concerned community and economic development leaders in Southwest Florida region to discuss the creation of a coordinated strategy for developing new strategies for capital formation. The assembled group sought input on regional economic priorities through a series of meetings and ultimately commissioned a formal study to focus on the feasibility of a Regional Angel Fund. The assembled group stated their number one priority was to forge a path toward regional, organic innovation. Together, this group of regional community, economic development and education organizations and institutions were asked to form a leadership team and cooperate on a feasibility study. The feasibility study, called the Southwest Florida Regional Angel Fund Assessment (“SWFRAFA”) began in January 2008 and concluded with the publication of its findings in October 2008.

The underlying purpose of the SWFRAFA was to investigate the feasibility of establishing a Regional Angel Fund in Southwest Florida. Specifically, the SWFRAFA goals were:
1. Conduct a SWOT analysis of Southwest Florida leveraging the Ewing Marion Kauffman Foundation’s Community Assessment Template in “A Guidebook to Developing the Right Angel Organization for Your Community” written by Susan L. Preston and published August 2004.
2. Advocate a specific conclusion on whether or not to establish a Southwest Florida Regional Angel Fund.
3. Identify recommendations and a plan of action that enhances the prospects for Innovation and Entrepreneurship in the Region.

The creation of the Tamiami Angel Fund I, LLC was a consensus strategic outcome of the Southwest Florida Regional Angel Fund Assessment and has been supported by the twelve regional organizations that pulled together to produce SWFRAFA. TAFI would like to recognize their contribution to the creation of SW Florida’s First Angel Fund by listing their names below:

The SWFRAFA would never have been initiated without the bold leadership and enthusiasm of these organizations. Their collaborative efforts to pursue novel approaches for growing the size of the regional economy and the establishment of an SW Florida First Angel Fund require our recognition and thanks.

After the successful launch of the Tamiami Angel Fund, the Gulf Coast Venture Forum was re-organized into FusionPointe, a venture development organization, www.fusionpointe.org.  FusionPointe's mission is to create more investor ready startups in Southwest Florida.
Powered by